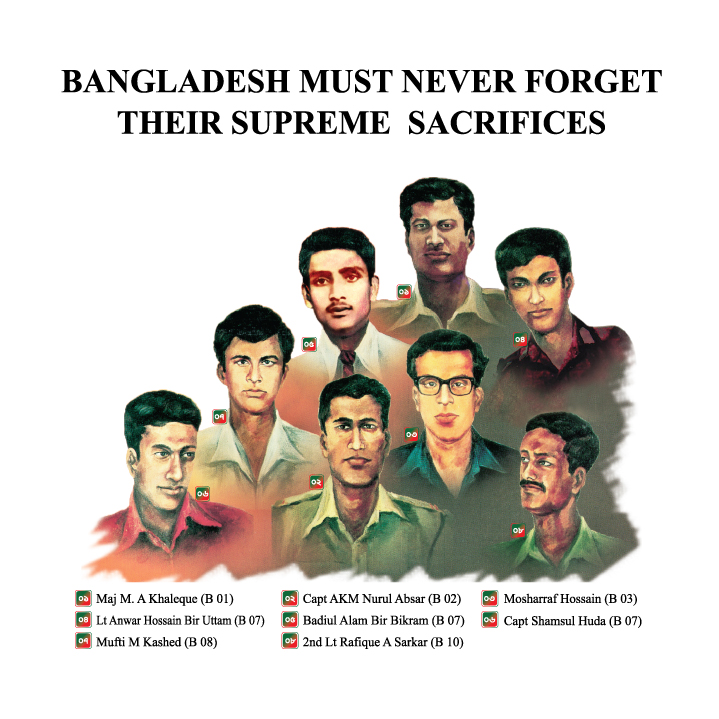 OFn. Major Abdul Khaleq (01/99) of the erstwhile Pakistan Army was posted in a unit at the Comilla Cantonment. He embraced martyrdom in Comilla in March.

OFn. Mosharraf Hossain (03/216) embraced martyrdom while serving as a Director at Karnaphulli Paper Mills at Kaptai in December.

OFn. Lt Anwar Hossain (07/182) of the erstwhile Pakistan Army revolted in March while he was posted at Jessore Cantonment. He was the first army man to embrace martyrdom, in a frontline battle in March. He was posthumously decorated with the gallantry award - Bir Uttam. Shaheed Lt Anwar Bir Uttam Girls’ School at Dhaka Cantonment was named in his honor.

OFn. Badiul Alam (07/164) joined the Liberation War when he was a student of Karachi University. He was a member of the famous Crack Platoon Dhaka. He was posthumously decorated with the gallantry award - Bir Bikram. The film 'Aguner Parasmini' depicts his life as a freedom fighter.

OFn. Capt Shamsul Huda (07/181) of the erstwhile Pakistan Army was on leave when the Liberation War broke out. He opted to join the Liberation War rather than join the Pakistan Army. He sacrificed his life in November on the eastern front. Shaheed Captain Shamsul Huda High School at Muradpur in Chittagong district’s Sitakunda area was named in his honor.

OFn. Mufti Muhammed Kased (08/245) joined the Liberation War while he was a 3rd-year student of the Bangladesh University of Engineering and Technology (BUET). He sacrificed his life in a frontline battle in a place near Kaoraid Railway Station at Mymensingh in June. As an honor to the valiant martyr, a chess competition named ‘Mufti Kased Chess Competition’ takes place in BUET every year.

OFn. Second Lt. Rafique Ahmed Sarkar (10/596) was commissioned in the East Regiment of the erstwhile Pakistan Army in 1970. He was posted at Rangpur Cantonment when the Liberation War broke out. He is the youngest Old Faujian to embrace martyrdom during the War of Liberation.

Your session is about to expire!

You will be logged out in seconds.
Do you want to stay signed in?
Yes, Keep me signed in No, Sign me out